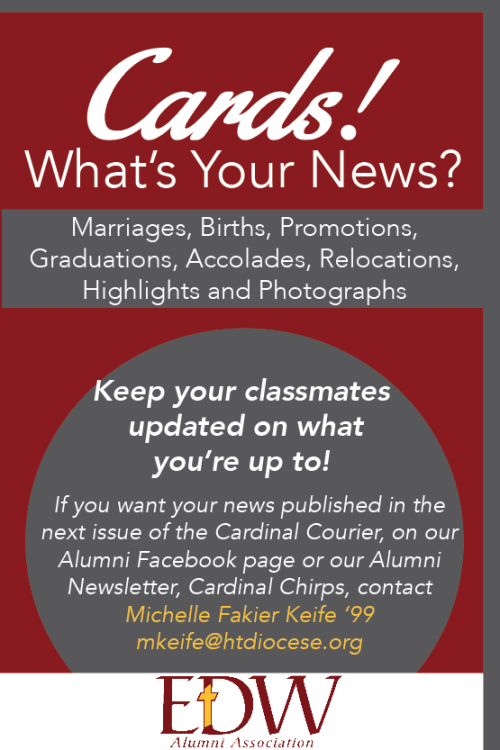 Recently married? New home address? Changed your phone number or email? Help us keep our Alumni Directory up to date by submitting this form

If you are interested in memorializing someone in our Prayer Garden, email Jane Bourgeois at edwalumni@htdiocese.org

A Thibodaux native, Mark has a 37 -year career with Halliburton Energy Services, a Fortune 500 company whose name is synonymous with business success in the oil and gas industry, where he currently serves as President over their Western Hemisphere and as a member of the Company’s Executive Committee.

After graduating from Edward Douglas White in 1979, Mark went on to Louisiana State University (LSU) where he completed a Bachelor of Science degree in electrical engineering.  Soon after, he began his career in the oil and gas industry by working for Gearhart Industries as a wireline logging engineer until Halliburton acquired them in 1988.  From there onward he held various positions of increased responsibility in operations and sales. He became the VP of the Gulf of Mexico in 2007 headquartered in Lafayette where he was responsible for the profitable growth, return on investment, optimal utilization of capital and resources that maximize shareholder value. In 2009, Mark was relocated to Dubai where he served as Sr Vice President of Business Development for Halliburton globally responsible for developing growth strategies and building relationships with Halliburton’s customers worldwide. Mark’s continued executive development brought him to Kuala Lumpur, Malaysia in 2011 as Sr Vice President of the Asia Pacific Region and then to London in 2014 as Sr Vice President over Halliburton’s Europe, Eurasia, and West Africa operations.

Mark returned to Houston in 2017 as the Sr Vice President of Business Development before settling into his current role as President of the Western Hemisphere responsible for all aspects of the business in North America Land, the Gulf of Mexico and Latin America.

Described as a vibrant natural leader and an inspiration to all, Mark’s “can-do” attitude, organizational, and people skills helped him develop a reputation for routinely going above and beyond to enhance and grow the company and others as seen by his participation in Halliburton’s Presidential Leadership Excellence Program, which he was a graduating member in 2007. In 2012, he was given the annual Big Red award, the highest honor an employee can receive at Halliburton that embodies the passion and professionalism that are hallmarks of past recipients.

Mark serves on the Dean’s Advisory Council for the LSU College of Engineering; he is a member of the Society of Petroleum Engineers; the American Association of Drilling Engineers; and the American Petroleum Institute (API), where he serves on the Upstream Committee. He also represents Halliburton on the board of directors of the Permian Strategic Partnership.

Along with his wife, Jackie Hymel Richard, they raised 3 daughters: Michelle Gillespie, Aimee Landry and Alyson Wooderson and are the devoted grandparents to grandson Everett.

This website uses cookies to improve your experience while you navigate through the website. Out of these cookies, the cookies that are categorized as necessary are stored on your browser as they are essential for the working of basic functionalities of the website. We also use third-party cookies that help us analyze and understand how you use this website. These cookies will be stored in your browser only with your consent. You also have the option to opt-out of these cookies. But opting out of some of these cookies may have an effect on your browsing experience.
Necessary Always Enabled
Necessary cookies are absolutely essential for the website to function properly. This category only includes cookies that ensures basic functionalities and security features of the website. These cookies do not store any personal information.
Non-necessary
Any cookies that may not be particularly necessary for the website to function and is used specifically to collect user personal data via analytics, ads, other embedded contents are termed as non-necessary cookies. It is mandatory to procure user consent prior to running these cookies on your website.
SAVE & ACCEPT